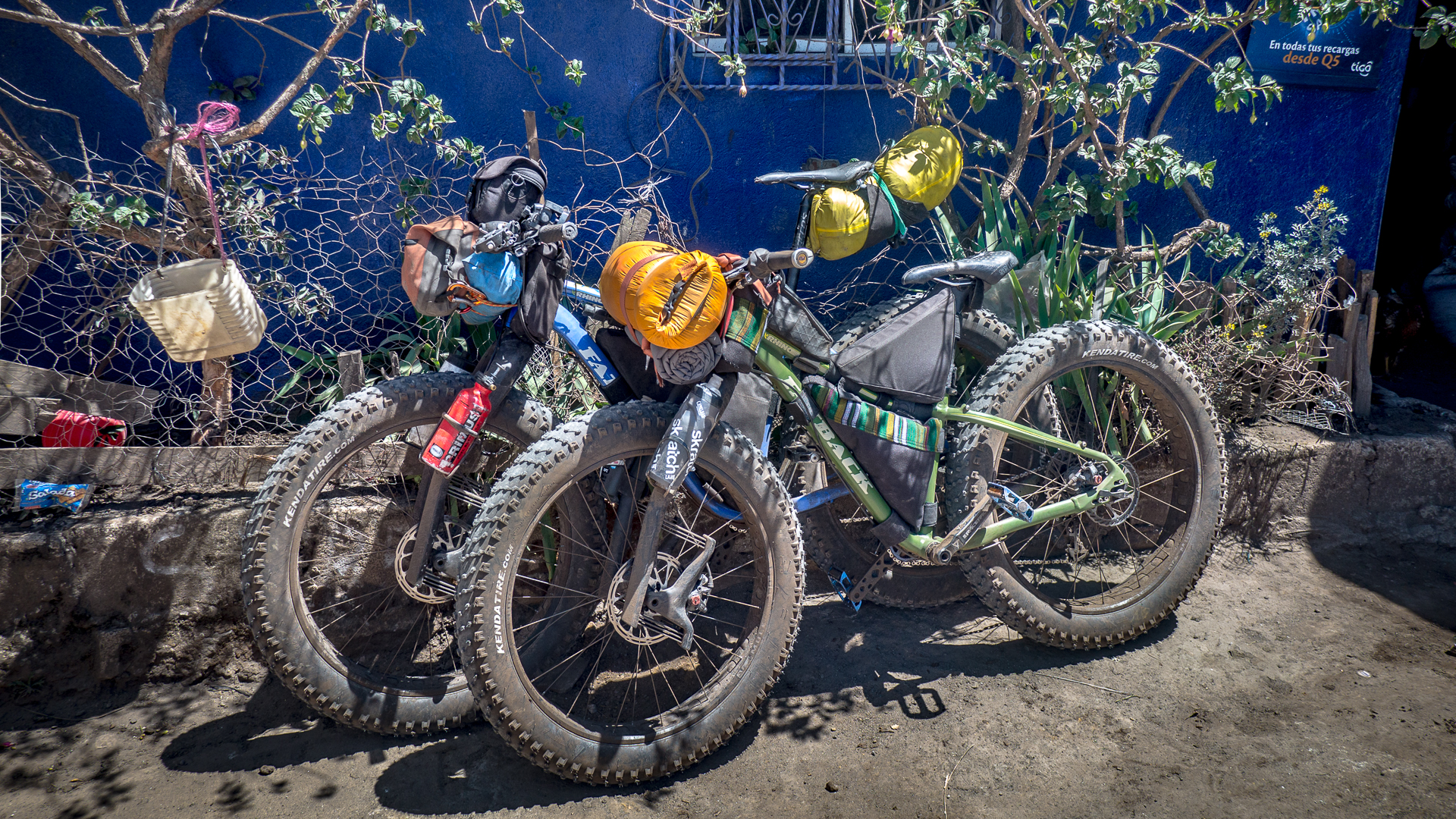 Exploring the northern region of Guatemala and Ixchiguán on fatbikes

Ixchiguán and the Search for Volcán Tacaná

The time Liz and I spent in Ixchiguán was not the highlight of our trip. It involved a terrible stomach sickness for the two of us, an unfriendly encounter with the locals, and we had to scrap one of my most coveted objectives of the entire expedition: the ascent of Volcán Tacaná (4060m).

There was very little information on the route or the roads in the area. I was recovering from a sickness that had left me bedridden for 3 days and too weak to get to the summit of Volcan Tajumulco  – lowering our morale even more. My plan was to recover “on the road” and take it slowly.

When you reach the end of the Chicken bus network you move on to pickups.

There was very little information on the route or the roads in the area. I was recovering from a sickness that had left me bedridden for 3 days and too weak to get to the summit of Volcan Tajumulco  – lowering our morale even more. My plan was to recover “on the road” and take it slowly.

When Liz came to me with the idea of Volcanarchy I somewhat knew what logistics would be involved. I had hiked most of the objectives on foot with the exception of Volcan Tacana. Ever since I had stood on the summit of Tajumulco looking across towards the Mexican border I had been enticed by the volcano’s appeal. It was big, remote, and stood alone, with much more prominence than Tajumulco.

There were two routes to its summit: one involved a 3 day trek from the Mexican side of the border and the other involved reaching the remote town of Sibinal on the Guatamala side to which there was very little public transportation. To my knowledge no one has taken bicycles up Tacana – I knew it would be the highlight of the expedition.

Coincidentally we were also scheduled to be in the San Marcos district during the holy week of Semana Santa, during which they have a hiker’s reunion on the mountain, so I thought that would be cool to catch as well.

The northern frontier of Guatemala


Looking across the valley beneath Tajumulco you can see the endless patchwork of fields and switch-backed dirt roads that climb the impossibly steep terrain. Although they are numerous, none of the roads are on the map and our research for this trip had to be done entirely with satellite imagry.

All the information on the San Marcos District is a bit sketchy. The area is known for narco-trafficking and violence and it shares a rugged and lengthy un-patrolled border with the Chiapas district in Mexico. During the Guatemalan civil war in the 70’s and 80’s the area was a stronghold of the rebel forces and they even used the summit of Volcan Tajumulco as a radio base to communicate with their soldiers.

The entire area has a certain lawlessness to it, with very little police presence and no tourism infrastructure. The entire region of San Marcos is at or above 10,000ft and can be considered alpine terrain, with very few trees, extreme weather and volcanic formations. The temperature ranges from blistering hot in the sun to extreme cold at night – San Marcos is one of the few areas in Guatemala that receives snowfall.

Back on the road!

After a welcome breakfast with a family who ran a small tienda at the base of Tajumulco we were off along the highway to Sibinal.  Taking the fatbikes on pavement can be a bit of a bog so we pumped up the tire p.s.i in preparation for the 40k journey. The highway afforded enormous views southward across the country and east towards Huehuetenango.

I was moving slowly, weakened from our 12 hour climb of Tajumulco and a shivering cold night in the tent the day before. The weather in the northern area could be quite temperamental – hot one minute in the sun and freezing cold the next in the shade. We were at 10,000ft after all.

We made our way slowly gaining altitude en route to Sibinal, somewhat recovering from an intense day on Volcan Tajumulco. The energy just wasn’t there for me that day and I ended up passing out on the roadside, still very sick from the week before. We had already been through a lot on this expedition and I found myself at an all time low –  with serious doubts that we would make our objective of Volcan Tacana after traveling so far.

Both weak from the day before we decided to take a long siesta on the side of the highway and take in the clouds as they cascaded up the valley.