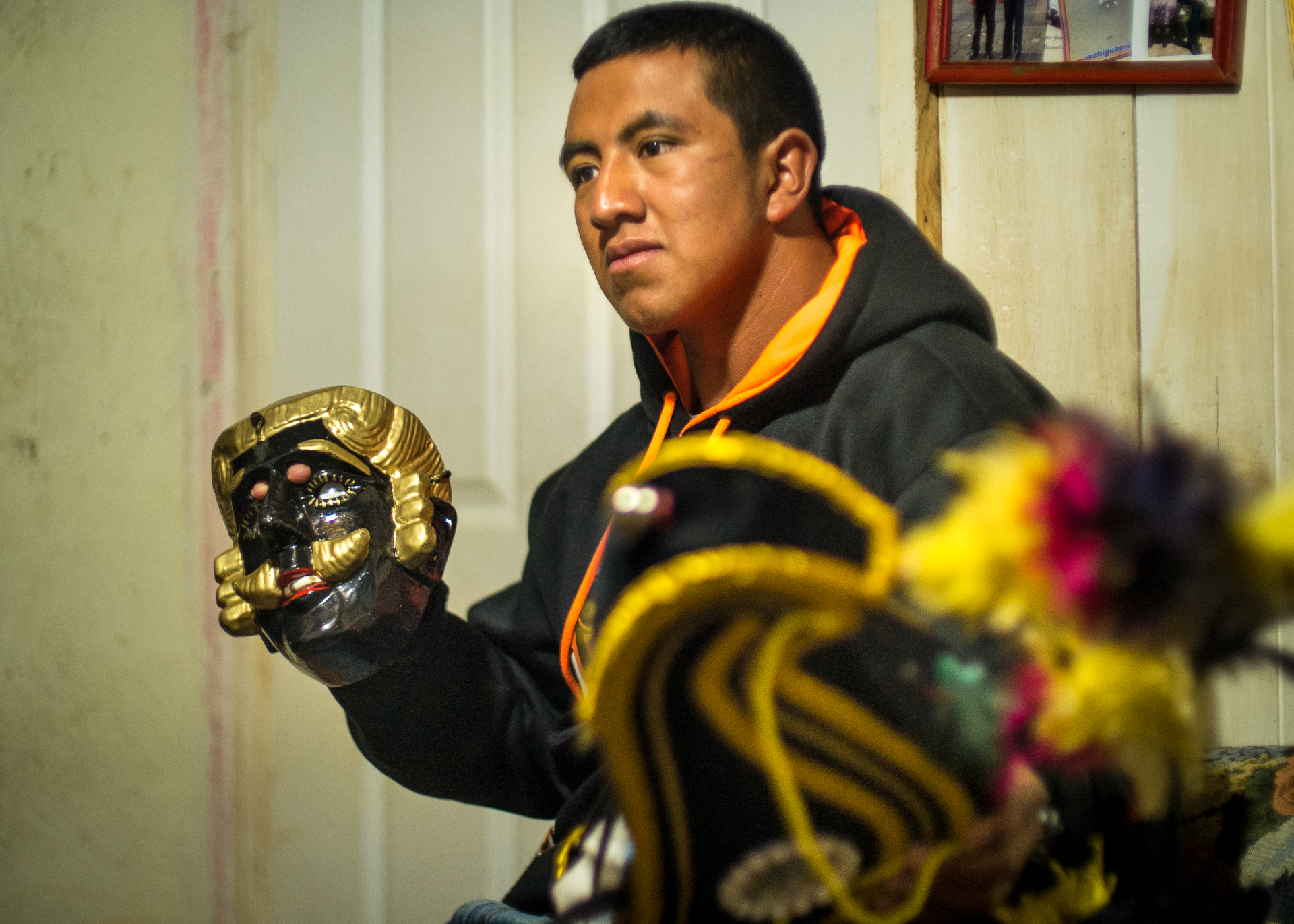 Exploring the northern region of Guatemala and Ixchiguán on fatbikes

Brendan heads up the hill above Ixchiguan as our shadows grow long.

A place to rest

After our much-needed siesta on the side of the road between Tajumulco and Tacana, Brendan and I continued north. We were headed for the pueblo of Sibinal, which was at the base of Volcan Tacana. But our siesta had set us back, and we knew we would not make the 40k to Sibinal that night.

We crested a hill as the shadows were growing long, and we were both getting hungry. Below us was a town: the village of Ixchiguan. Maybe we could camp somewhere around here? It would be a push for Tacana in the morning, but anything that would help Brendan recover was our priority- solid food and a good night’s sleep. As we coasted down, we saw a steep trail heading up an adjacent hillside towards a cemetery. The hill was just above treeline. It looked peaceful up there. Although we didn’t really have the energy to push the bikes up another hill – we decided to have a look.

Room with a view

At the crest of the hill was a Cemetario, with a few lone horses grazing in the stubbly alpine grass. Uphill from us a sleepy pueblo lay off in the distance.  We scouted the barren slope for a flat spot to camp for the evening -out of sight of the Mayans. To the west we had a 180 degree panorama with views of Volcán Tajumulco on our left and Tacaná off to the right. Here we were, at our tiny spot in space – halfway between our two objectives and our view framed by the two largest points in the continent.

Our hilltop camping spot was perfect.  Although we could not see it we knew the Pacific ocean was right there – 11,00ft below us and beneath the coastal clouds. “Not too bad!” said Brendan, eagerly setting up his tripod as the last light of the day faded.


When we crested the hill above Ixchiguan, there was no one in sight. The sun was setting, a storm was brewing on the horizon, and we were eager to put up the tent and cook dinner.

I wondered if we should find someone to ask if we could camp there, but we both knew it would take too much time to attempt to chase down a caretaker at that point. We figured we would be out of there early enough in the morning that no one would notice us.

In the distance, a major electrical storm was quickly enveloping the ridge between us and Tajumulco. As the sun set it took with it it’s last golden rays beneath the clouds. I put up the tent while Brendan cooked dinner, trying to minimize the time we would need to be outside if the storm came our way. Thunder rumbled and lightning cracked across the sky as we huddled in the dirt alcove, sheltered from the wind. We ate our simple staple of a travel meal (quinoa, pasta sauce and dehydrated tofu) and watched the storm rage and then roll on. Thankfully, it didn’t reach us.

A different kind of storm

Sometime in the night, I awoke to a different kind of storm brewing- this time in my stomach. Oh shit. I spent the rest of the night running for the bushes. I don’t think I’ve ever been that sick in my life.

In the morning, I learned that Brendan had gotten it too. Sick on top of sick. We laid in the tent all morning, both moaning in pain in between runs for the bushes, trying to figure out what had gotten us. Was it the packeted sauce? The dehydrated tofu? Or maybe the breakfast we had many hours earlier at the tienda near the base of Tajumulco? Whatever it was, it got us good. We were wrecked.

Volcán Tacaná towered over us just a little ways north, but it might as well have been on another continent. At that point neither of us cared.

Just when we thought nothing else could possibly go wrong...

In the afternoon, clouds rolled in and a misty rain started to fall. We drifted in and out of fitful sleep, punctuated by stomach cramps. At around 4 pm, I awoke to the sound of commanding voices outside.

I peeked through the tent mesh and saw 12 angry Mayans standing there, both men and women, armed with clubs. My heart dropped into my stomach as I shook Brendan awake. “I think we’re in trouble.”

Brendan went outside while I stayed lying in a heap hoping that being a sick woman would evoke mercy. The villagers from up the hill had been watching us throughout the day and raised the alarm. This group was sent as representatives from the village to run us out.

Brendan explained the situation, that we did not mean any harm, that we were tourists traveling by bike and headed to the volcano, we had planned to leave early in the morning, but had gotten sick during the night.

They gave us a 20 minute speech, saying that we should not be here, that it was private land, people come there to pay respects to their dead and would not want to see someone camping up there, and besides it was dangerous: there were coyotes around, and people who would come and throw us off the cliff while we were in the tent.

Brendan pleaded for one more night to recover, saying the woman in the tent was very sick and could not move. They wanted to see me, so I poked my head out of the tent and moaned, “disculpeme, no tengo problemas, estoy muy enferma.”

The group had a tense conversation in Mam, the native Mayan language of the northern region. Finally, they informed us that they would give us one hour to pack up and move on. If we were not gone in an hour — “there will be problems.”

It was evident they felt threatened by us. The wild border area was known for narcotrafficking, and certainly not for tourism. No one here sees gringos. Sick, tired, and frustrated, trying not to shit our pants, we packed our things in the cold rain as they smirked, smacking their clubs in their hands.

We finally managed to stuff our wet gear into our packs and trudged off, dripping and despondent, back down the hill towards town.

When we got to Ixchiguan, I was a wreck. I was barely able to move without releasing a foul torrent of liquid bowel magma down my pant legs. My stomach felt like something had curled up and died in there, and its ghost was trying to claw its way out.

Brendan was slightly more functional, and when we stopped at the pharmacy, the first building in town, he went in to seek help while I lay in a pathetic heap on the side of the road.

He emerged with a concerned-looking Mayan man who introduced himself as Ramirez. He was the pharmacist, and wanted to talk to me. He was very kind as he asked me about my symptoms, and quickly produced water and some pills for both of us: an antiparasitic drug he said would have us feeling better in two or three days.

He also gave us the names of the two hotels in town, and his phone number, with instructions to call him if we needed any help.

Darkness fell as Brendan and I slogged up the main street of Ixchiguan. We found both hotels and looked at the rooms. They were no place for a sick person: stinking of mold, no ventilation, and sketchy electrical wires running everywhere. I would rather sleep outside.

As we stumbled back out into the night, I was trying hard to hold it together. Freaking out or panicking wasn’t going to get us anywhere, but I was at my wits end and doing everything I could to keep from having to drop my pants and shit in the street.

Desperate, I pulled out Ramirez’s number and asked Brendan to please call him. “And ask him what?” he asked. “I don’t know,” I said. “But he said to call if we needed help. And I think we need help.”